THE BOOK OF THE LAW
sub figurâ XXXI 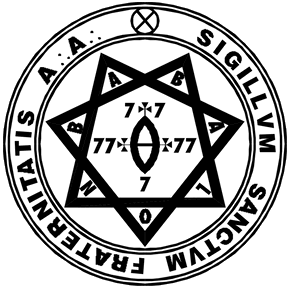 The technical title of the book is Liber AL vel Legis, sub figura CCXX, as delivered by XCIII=418 to DCLXVI, although this title never occurs in the Book itself, which refers to itself as “the Book of the Law” and “the threefold Book of Law” (chapters 1:35, 3:75).

CCXX is 220 in Roman figures, representing The Tree of Life (10 numbers times 22 paths), and is the number of verses of the Book in typescript. XCIII is 93, the enumeration of both “The word of the law” Thelema and Aiwass. DCLXVI is 666, the number of Crowley as the “Great Beast” both as Adept and Magus. This is a way of saying that the book was delivered by Aiwass (whose number is both 93 and 418) to Crowley, who is The Beast 666.

The facsimile manuscript of the Book is not, however, numbered 220, but XXXI (31) as the first chapter’s verses are unnumbered in the original manuscript: that is, no verse numbers were dictated to Crowley for chapter one. Both editions were titled by Crowley AL, pronounced “El”, value 31, so therefore Liber 31 is the manuscript of The Book of the Law called AL (not be confused with Liber 31 by C. S. Jones (Frater Achad), which is an exegesis of some of the qabalistic symbolism of the Book), whereas Liber 220 is the edited (strictly according to the editing instructions dictated as part of the text of the Book itself), printed form of the text: see The Equinox of The Gods for a full account by Crowley of the reception and publishing of the Book according to these internal instructions.

The original title of the book was Liber L vel Legis. Crowley retitled it Liber AL vel Legis in 1921, when he also gave the handwritten manuscript its own title, Liber XXXI.1

The original manuscript of The Book of the Law was sent on Crowley’s death to Karl Germer, the executor of his will and head of the A∴A∴. On Germer’s death no trace of it could be found in his papers. There matters rested until 1984, when Tom Whitmore, the new owner of a house in Berkeley, California, began searching through the junk left in the basement by the previous owner. Among the used mattresses, lumber, and outdated high school textbooks were two boxes of assorted papers and newspaper clippings dealing with Germer’s affairs, the charter of the O.T.O. and an envelope containing the manuscript of The Book of the Law. Whitmore donated the papers to the O.T.O. How they found their way to a Berkeley basement remains a complete mystery.2

About the Title Page

This is a transcript of the original handwritten cover of Liber AL:

[This MS {manuscript} is a highly interesting example of genuine automatic writing. Though I am in no way responsible for any of these comments – except the translations of the stele inscription – I publish them among my works because their intelligent study may be interesting and helpful ]. A.C.

The text was originally titled ‘Liber L’ because this is how Rose Crowley initially interpreted the sound when she heard it. As later confirmed by Gematria, the title was altered to Liber AL. ( al = 31, aleph=1 + lamed=30 )

It is not often mentioned that the dictation of parts of the manuscript was due the clair-audience of Therion’s wife (Rose Edith Kelly Crowley) aka “Ouarda the Seer”. Although accounts of the Book’s reception vary, it seems that Rose was also able to hear the voice of Aiwass. [See the Commentary on chapter III v. 72 (Page 64) on the force of Coph Nia, a term that appears in the original m.s. in Rose’s hand, since apparently A.C. was initially unable to hear it.]

“Now who, it may be asked, was Aiwass?
It is the name given by W. [Ouarda, Rose Edith Kelly Crowley] to P. [Perderabo, Aleister Crowley] as that of her Informant.”3

To make it clear: In the last volume of Crowley “The Collected Works” was going to be an Appendix. This was to include Liber AL (or as it was then called “Liber L”) and a few other documents. It made it all the way into the galley proof stage. The image above is of the folder that contains the galley proofs of the Appendix that would have been in Volume 3 of the “The Collected Works”. It was wrongfully stated as being the cover sheet to the original MSS of Liber AL in “Magick: Liber ABA” on page xi of the editor’s introduction.4

Changes to the manuscript

The final version of Liber Legis includes text that did not appear in the original writing, including many small changes to spelling. In several cases, stanzas from the Stele of Revealing were inserted within the text.

Above, the gemmèd azure is
The naked splendour of Nuit;
She bends in ecstasy to kiss
The secret ardours of Hadit.
The wingèd globe, the starry blue,
Are mine, O Ankh-af-na-khonsu!

And the sign shall be my ecstasy, the consciousness of the continuity of existence, the unfragmentary non-atomic fact of my universality. along with a note: Write this in whiter words But go forth on.

This was later changed to:

And the sign shall be my ecstasy, the consciousness of the continuity of existence, the omnipresence of my body. (AL I:26)5

Later, it was Rose who filled in the lost phrase:

Chapter 3 has a few spelling changes, and includes large chunks inserted from Crowley’s paraphrase of The Stele of Revealing.

The phrase “Force of Coph Nia”6, which is found in Chapter 3, on Page 64 (vv. 68 – 72) (verse 72), was filled in by Rose Kelly because that place in the manuscript had been left incomplete as not having been properly heard by Crowley during the supposed dictation.7 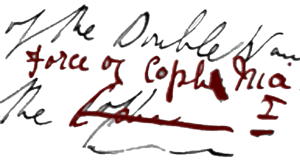 Israel Regardie proposed that Coph Nia could have been intended to represent Ain Soph, the Kabbalistic phrase for “Infinity”, and that Rose might not have known that Hebrew letters are written from right to left or their meaning.8

[4] See: Galleys of the Collected Works (1907). It is polashtal.com/significant-sources-2-galleys-of-the-collected-works-1907ssible to download the Liber L Galleys (Appendix of the Collected Works) from Lasthal.com. In keeping with the title, this free download is of a highly significant piece by Aleister Crowley, often spoken of but rarely seen. The PDF file comprises the September 1907 galley proofs of an intended Appendix to the Collected Works, prepared but subsequently discarded by Aleister Crowley. The Appendix was going to reproduce Liber L (The Book Of The Law) together with supporting material. It is a curious document that raises as many questions as it answers! The document is reproduced here with full permission of the copyright holder.

[5] In his Commentaries, Crowley writes: “This phrase was totally beyond the comprehension of the scribe, and he said mentally — with characteristic self-conceit — ‘People will never be able to understand this.’ Aiwass then replied, ‘Write this in whiter words. But go forth on.’ He was willing that the phrase should be replaced by an equivalent, but did not wish the dictation to be interrupted by a discussion at the moment. It was therefore altered (a little later) to ‘the omnipresence of my body.’ It is extremely interesting to note that in the light of the cosmic theory explained in the notes to verse 3 and 4, the original phrase of Aiwass was exquisitely and exactly appropriate to his meaning.”

[6] “I am the Lord of the Double Wand of Power; the wand of the Force of Coph Nia — but my left hand is empty, for I have crushed an Universe; & nought remains.” [Liber AL III.72]

With The Wand: 154+2 (Beth & The Magus of power of the Tarot or The Caduceus)
= 156 BABALON, The Mount of Abiegnus, The Holy Mountain of Initiation