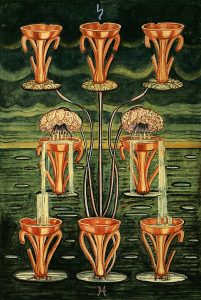 The Eight, Hod, in the suit of Water, governs this card. It shows the influence of Mercury, but this is overpowered by the reference of the card to Saturn in Pisces. Pisces is calm but stagnant water; and Saturn deadens it completely. Water appears no longer as the Sea but as pools; and there is no florescence in this card as there was in the last. The Lotuses droop for lack of sun and rain, and the soil is poison to them; only two of the stems show blossoms at all. The cups are shallow, old and broken.

They are arranged in three rows; of these the upper row of three is quite empty. Water trickles from the two flowers into the two central cups, and they drip into the two lowest without filling them. The background of the card shows pools, or lagoons, in very extensive country, incapable of cultivation; only disease and miasmatic poison can flourish in those vast Bad Lands.

The water is dark and muddy. On the horizon is a pallid, yellowish light, weighed down by leaden clouds of indigo.
Compare with the last card; it represents the opposite and complementary error. The one is the Garden of Kundry, the other the Palace of Klingsor.

In the psychopathology of The Path, this card is the German Measles of Christian Mysticism.