O.T.O. – Order of the Temple of the East

The Initiatory Structure of the O.T.O.

The structure of O.T.O., like that of Freemasonry and the ancient mystery schools, is based on a staged series of initiations or degrees. In the rituals of these degrees, O.T.O. seeks to instruct the individual by allegory and symbol in the profound mysteries of nature, and thereby to assist each initiate in discovering his or her own true identity.

The initiation can be conferred only in a physical ceremony conducted by a properly chartered initiator. See the membership page for information on how to apply for initiation.

Initiate membership is subdivided by degree. There are a total of 21 initiate degrees in O.T.O., including thirteen numbered degrees and eight un-numbered, intermediate degrees or sub-degrees. The degrees of O.T.O. are divided into three Grades or “Triads”: the Hermit, the Lover, and the Man of Earth, as shown in the accompanying table:

Every man and woman of full age, free, and of good report, has an indefeasible right to the first three degrees of O.T.O. These “first three degrees” actually include all the degrees in the Man of Earth Triad; as the Minerval is considered a prologue to the First Degree, and the Fourth and P∴I∴ Degrees are considered pendants to the Third Degree.

The Initiation System of the O.T.O. 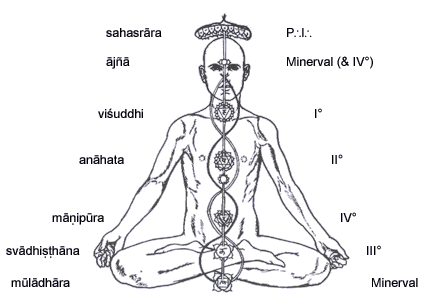 The Minerval Degree (0°) is an introductory Initiate degree in which the aspirant is considered an “honored guest” of O.T.O. rather than a full member. The Minerval degree is designed to allow the aspirant to decide whether or not to pursue full membership and to allow potential sponsors the opportunity to decide whether to support the aspirant’s application for full membership. Minervals may begin preliminary novitiate training under an E.G.C. Bishop towards ultimate ordination to the Diaconate and/or Priesthood in Ecclesia Gnostica Catholica, but they are not eligible for ordination or for service as an officer of a Local Body.

The First Degree (I°) bestows full membership upon the initiate. A First Degree initiate may retire from active participation in O.T.O., but the spiritual link forged between the initiate and the Order during the ceremony of the First Degree will remain throughout the initiate’s life. An initiate of the Second Degree is eligible for ordination as a deacon of Ecclesia Gnostica Catholica.

Beyond the degree of P∴I∴, advancement is by invitation only. Initiates of the intermediate degree of Knight of the East and West (K∴E∴W∴) are eligible for formal ordination to the Priesthood in Ecclesia Gnostica Catholica. Episcopal consecration in Ecclesia Gnostica Catholica is conferred as part of the Seventh Degree. The Tenth Degree (X°) is held by the National Grand Master General of O.T.O. in a particular country.

The Man of Earth degrees follow a pattern based on the symbolism of the Chakras and the stages of Kundalini Yoga; and represent, in dramatic form, the Individual’s Path in Eternity. In the 0°, the Ego, a wandering God, is attracted to the Solar System. In the I°, the Child experiences Birth. In the II°, the Man or Woman experiences Life. The III° represents the Death of the individual, and the IV° represents the world beyond Death, the glorified state of the Initiate. In the P∴I∴ Degree, the Initiate symbolically achieves ultimate Perfection (Completion), and the entire cycle is withdrawn into Annihilation. 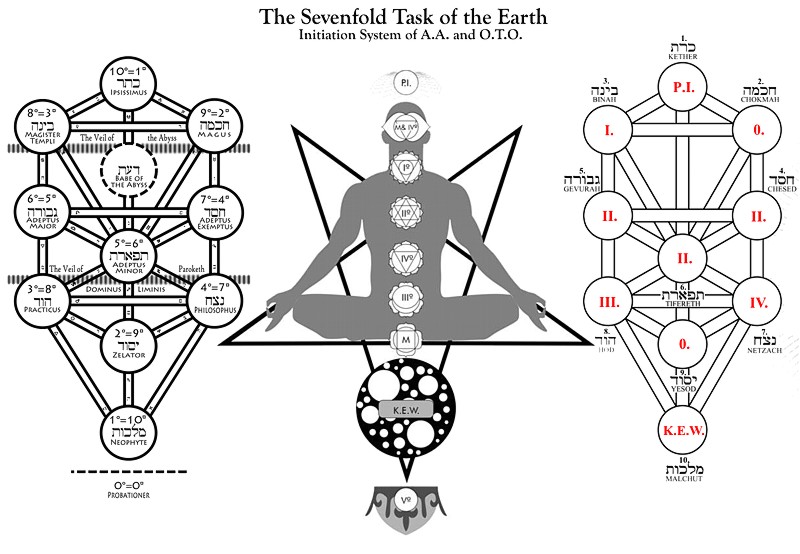 Of these Events or Stations upon the Path, all but the II° represent single critical experiences. We, however, are concerned mostly with the varied experiences of Life. All subsequent degrees are therefore elaborations of the II°, progressive instruction in how to live since in a single ceremony it is hardly possible to sketch, even in the briefest outline, the Teaching of Initiates with regard to Life.

The V° – IX° rituals and teachings are therefore instructions to the Initiate in the Mastery of Life; there is instruction in Hermetic Philosophy, Qabalah, Magick and Yoga, all aimed at preparing the Initiate for the revelation and application of one Supreme Secret.

Every man and woman of full age (18 or more years old), free, and of good report, has an indefeasible right to the first three degrees of O.T.O. (but not according to any particular time schedule). These “first three degrees” actually include all the degrees in the Man of Earth Triad (the Minerval is considered a prologue to the First Degree, and the Fourth and P∴I∴ Degrees are considered pendants to the Third Degree).

O.T.O. membership does not, of itself, confer any status in Freemasonry. Nearly one hundred years ago, when O.T.O. was established in Germany, it was closely allied to several rites of European Freemasonry. However, in 1918, Aleister Crowley determined it appropriate for O.T.O. to assert its own unique identity as an independent system. At that time, while retaining the use of certain convenient customs and terminology used in early Freemasonry, Crowley revised the O.T.O. rituals, insignia and modes of recognition to avoid infringing upon the legitimate privileges of the established and recognized authorities of modern Freemasonry, and also to specifically reflect the teachings of Thelema. Crowley’s O.T.O. has not claimed to “make Masons” since that time. Further revisions along similar lines have been implemented in more recent years.