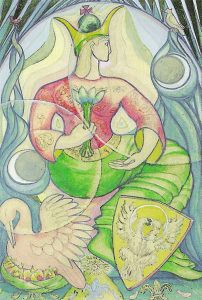 This is the Harmony of the Universe, that Love
unites the Will to create with the Understanding
of that Creation: understand thou thine own

Will.
Love and let love. Rejoice in every shape of love,
and get thy rapture and thy nourishment thereof.
Love, beauty, happiness, pleasure, success, completion, good fortune, graciousness, elegance, luxury,
idleness, dissipation debauchery, friendship, gentleness, delight.
Pour water on thyself thus shalt thou be
a Fountain to the Universe.
Find thou thyself in every Star.
Achieve thou every possibility.
War, conquest, victory, strife, ambition, originality,
overweening confidence and megalomania,
quarrelsomeness, energy,
vigour, stubbornness, impracticability, rashness, ill-temper.
This card is attributed to the letter Daleth, which means a door, and it refers to the planet Venus. This card is, on the face of it, the complement of The Emperor; but her attributions are much more universal.

On the Tree of Life, Daleth is the path leading from Chokmah to Binah, uniting the Father with the Mother. Daleth is one of the three paths which are altogether above the Abyss. There is further more the alchemical symbol of Venus, the only one of the planetary symbols which comprises all the Sephiroth of the Tree of Life. The doctrine implied is that the fundamental formula of the Universe is Love. [The circle touches the Sephiroth I, 2, 4, 6, 5, 3; the Cross is formed by 6, 9, 10 and 7, 8.]
It is impossible to summarize the meanings of the symbol of the Woman, for this very reason, that she continually recurs in infinitely varied form. “Many-throned, many-minded, many-wiled, daughter of Zeus.”
In this card, she is shown in her most general manifestation. She combines the highest spiritual with the lowest material qualities. For this reason, she is fitted to represent one of the three alchemical forms of energy, Salt. Salt is the inactive principle of Nature; Salt is matter which must be energized by Sulphur to maintain the whirling equilibrium of the Universe. The arms and torso of the figure consequently suggest the shape of the alchemical symbol of Salt. She represents a woman with the imperial crown and vestments, seated upon a throne, whose uprights suggest blue twisted flames symbolic of her birth from water, the feminine, fluid element. In her right hand she bears the lotus of Isis; the lotus represents the feminine, or passive power.

Its roots are in the earth beneath the water, or in the water itself, but it opens its petals to the Sun, whose image is the belly of the chalice. It is, therefore, a living form of the Holy Grail, sanctified by the blood of the Sun. Perching upon the flamelike uprights of her throne are two of her most sacred birds, the sparrow and the dove; the nub of this symbolism must be sought in the poems of Catullus and Martial. On her robe are bees; also dominos, surrounded by continuous spiral lines; the signification is everywhere similar.

About her, for a girdle, is the Zodiac.

Beneath the throne is a floor of tapestry, embroidered with fleurs-de-lys and fishes; they seem to be adoring the Secret Rose, which is indicated at the base of the throne. The significance of these symbols has already been explained. In this card all symbols are cognate, because of the simplicity and purity of the emblem. There is here no contradiction; such opposition as there seems to be is only the opposition necessary to balance. And this is shown by the revolving moons.
The heraldry of the Empress is two-fold: on the one side, the Pelican of tradition feeding its young from the blood of its own heart; on the other, the White Eagle of the Alchemist.

With regard to the Pelican, its full symbolism is only available to Initiates of the Fifth degree of the O.T.O. In general terms, the meaning may be suggested by identifying the Pelican herself with the Great Mother and her offspring, with the Daughter in the formula of Tetragrammaton. It is because the daughter is the daughter of her mother that she can be raised to her throne. In other language, there is a continuity of life, an inheritance of blood, which binds all forms of Nature together. There is no break between light and darkness. Natura non facit saltum. If these considerations were fully understood, it would become possible to reconcile the Quantum theory with the Electro-magnetic equations.

The White Eagle in this trump corresponds to the Red Eagle in the Consort card, the Emperor. It is here necessary to work back wards. For in these highest cards are the symbols of perfection; both the initial perfection of Nature and the final perfection of Art; not only Isis, but Nephthys. Consequently, the details of the work pertain to subsequent cards, especially Atu vi and Atu xiv.

At the back of the card is the Arch or Door, which is the interpretation of the letter Daleth. This card, summed up, may be called the Gate of Heaven. But, because of the beauty of the symbol, because of its omniform presentation, the student who is dazzled by any given manifestation may be led astray. In no other card is it so necessary to disregard the parts, to concentrate upon the whole.