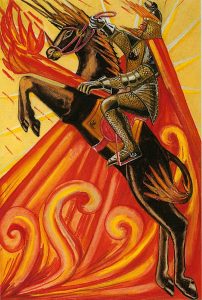 The Knight of Wands represents the fiery part of Fire; he rules from the 21st degree of Scorpio to the 20th degree of Sagittarius. He is a warrior in complete armour. On his helmet for a crest he wears a black horse. In his hand he bears a flaming torch; a flame also in his mantle; and upon the flames does he ride. His steed is a black horse leaping.
The moral qualities appropriate to this figure are activity, generosity, fierceness, impetuosity, pride, impulsiveness, swiftness in unpredictable actions. If wrongly energized, he is evil-minded, cruel, bigoted and brutal. He is in either case ill-fitted to carry on his action; he has no means of modifying it according to circumstances. If he fails in his first effort, he has no resource.

In the Yi King, the fiery part of Fire is represented by the 51st hexagram, Kan. The signification there given is entirely in accordance with the doctrine of the Tarot, but great emphasis is laid on the startling, perilous, and revolutionary character of the events cognate. The Querent is advised to be apprehensive, yet cool, resolute and energetic: to beware of untimely action, but to go forward with tense confidence in his own ability.

All these correspondences of the Yi King are to be studied in that book (S.B.E. vol. XVI) and reference is here made to the text when important passages are too long to be conveniently