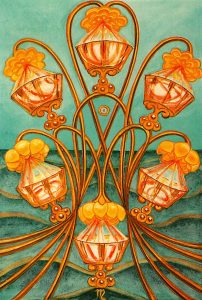 The lotus stems are grouped in an elaborate dancing movement. From their blossoms water gushes into the Cups, but they are not yet full to overflowing, as they are in the corresponding card below; the Nine.

Pleasure, in the title of this card, must be understood in its highest sense: it implies well-being, harmony of natural forces without effort or strain, ease, satisfaction. Foreign to the idea of the card is the gratification of natural or artificial desires. Yet it does represent emphatically the fulfilment of the sexual Will, as shown by the ruling Sephira, planet, element, and sign.
In the Yi King, Sol in Scorpio is represented by the 20th Hexagram, Kwan, which is also “Big Earth”, being the Earth Trigram with doubled lines. Kwan means “manifesting”, but also “contemplating”.

The Kwan refers directly to an High Priest, ceremonially purified, about to present his offerings. The idea of Pleasure-Putrefaction as a Sacrament is therefore implicit in this Hexagram as in this card; while the comments on the separate lines by the Duke of Chau indicate the analytical value of this Eucharist. It is one of the master-keys to the Gate of Initiation. To realize and to enjoy this fully it is necessary to know, to understand, and to experience, the Secret of the Ninth Degree of the O.T.O.