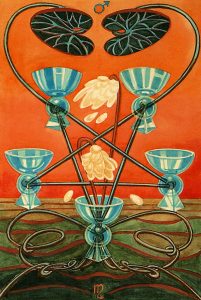 This card is ruled by Geburah in the suit of Water. Geburah being fiery, there is a natural antipathy. Hence arises the idea of disturbance, just when least expected, in a time of ease.

The attribution is also to Mars in Scorpio, which is his own house; and Mars is the manifestation on the lowest plane of Geburah, while Scorpio, in its worst aspect, suggests the putrefying power of Water. Yet the powerful male influences do not show actual decay, only the beginning of destruction; hence, the anticipated pleasure is frustrated. The Lotuses have their petals torn by fiery winds; the sea is arid and stagnant, a dead sea, like a “chott” in North Africa. No water flows into the cups.

Moreover, these cups are arranged in the form of an inverted pentagram, symbolizing the triumph of matter over spirit.
Mars in Scorpio, moreover, is the attribution of the Geomantic figure Rubeus. This is of such evil omen that certain schools of Geomancy destroy the Map, and postpone the question for two hours or more, when Rubeus appears in the Ascendant. Its meaning is to be studied in the “Handbook of Geomancy” (Equinox Vol. I, No.2).