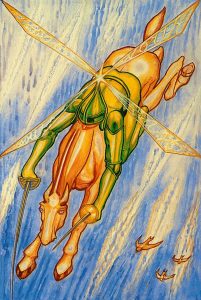 The Knight of Swords represents the fiery part of Air; he is the wind, the storm. He represents the violent power of motion applied to an apparently manageable element. He rules from the 21st degree of Taurus to the 20th degree of Gemini. He is a warrior helmed, and for his crest he bears a revolving wing. Mounted upon a maddened steed, he drives down the Heavens, the Spirit of the Tempest. In one hand is a sword, in the other a poniard. He represents the idea of attack.

The moral qualities of a person thus indicated are activity and skill, subtlety and cleverness. He is fierce, delicate and courageous, but altogether the prey of his idea, which comes to him as an inspiration without reflection.

If ill-dignified, the vigour in all these qualities being absent, he is incapable of decision or purpose. Any action that he takes is easily brushed aside by opposition. Inadequate violence spells futility. “Chimaera bombinans in vacuo”.

In the Yi King, the fiery part of Air is represented by the 32nd hexagram, Hang. This is the first occasion on which it has been simple to demonstrate the close technical parallelism which identifies Chinese thought and experience with that of the West.

For the meaning is long continuance: “perseverance in well-doing, or continuously acting out the law of one’s being”, as Legge puts it in his note on the hexagram; and this seems incongruous with the Qabalistic idea of violent energy applied to the least stable of the elements. But the trigram of Air also indicates wood; and the hexagram may have Suggested the irresistible flow of the sap, and its effect in strengthening the tree. This conjecture is supported by the warning in line 6: “The topmost line, divided, shows its subject exciting himself to long continuance. There will be evil.”

Allowing this, the image of “the extended flame of mind”, as Zoroaster calls it, may well be subjoined to the former description. It is the True Will exploding the mind spontaneously. The influence of Taurus makes for steadiness, and that of the first decanate of Gemini for inspiration. So let us picture him, “integer vitae scelerisque purus”, a light-shaft of the Ideal absorbing the entire life in concentrated aspiration, passing from earthy Taurus to exalted Gemini. Here, too, is shewn (as in the Yi) the danger to the subject of this symbol; for the first decan is the card called “Interference”; or, in the old pack, “Shortened Force”.