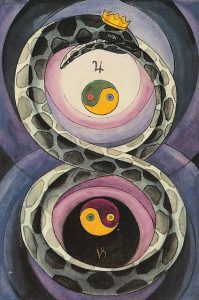 The number Two, Chokmah, here rules in the suit pertaining to Earth. It shows the type of Energy appropriate to Two, in its most fixed form. According to the doctrine that Change is the support of stability, the card is called Change.
Its celestial rulers are Jupiter and Capricornus; and these symbols are most inharmonious, so that in practical matters the good fortune of Jupiter is very limited. Their influence on the card is not great. Yet, Jupiter being himself the Wheel (Atu X), he emphasizes that idea.

The card represents two Pantacles, one above the other; they are the Chinese symbols of the Yang and Yin duplicated as in the Hsiang. One wheel is dextro- and the other laevo-rotatory. They thus represent the harmonious interplay of the Four Elements in constant movement. One may in fact consider the card as the picture of the complete manifested Universe, in respect of its dynamics.

About them is entwined a green Serpent (see Liber 65, chapter iii, verses 17-20). His tail is in his mouth. He forms the figure Eight, the symbol of the Infinite, the equation 0=2.